This cross-stones doesn't exist anymore, because of CULTURAL GENOCIDE.

"This cross-stone doesn't exist anymore, because of CULTURAL GENOCIDE" 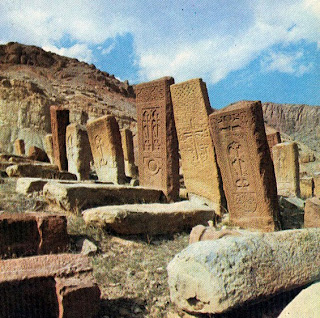 “It has become one of the most bitterly divisive issues in the Caucasus – but up until now no one has been able to clear up the mystery surrounding the fate of the famous medieval Christian cemetery of Jugha in Azerbaijan.

The cemetery was regarded by Armenians as the biggest and most precious repository of medieval headstones marked with crosses – the Armenians call them “khachkars” – of which more than 2,000 were still there in the late Eighties. Each elaborately carved tombstone was a masterpiece of carving.

Armenians have said that the cemetery has been razed, comparing its destruction to the demolition of two giant Buddha figures by the Taliban in Afghanistan. Azerbaijan has hit back by accusing Armenia of scaremongering, and of destroying Azerbaijani monuments on its own territory.